Even though I really had no idea if I was going to be able pull this off, I couldn’t resist thinking about what the completed LEO-1 would look like. I had all kinds of grand visions of switches and flashing lights that all the best CPUs have had over the decades since they were invented and I wanted LEO-1 to look like my favourite, the ICL 2900 series. Well, that wasn’t going to happen, was it? A nice dream, but that’s all.

I had originally considered making the enclosure out of wood and mounting individual LEDs on a hardboard front panel. I also investigated the idea of obtaining some kind of heavy-duty metal enclosure but decided it would be too difficult to drill all the holes. Then I discovered a company called Tap Plastics which lets you order various kinds of plastic sheet cut to the sizes you need. I got a few samples from them and decided that this was the way to go. I should be able to make the whole enclosure out of 1/8″ thick acrylic sheets.

A while after I had begun construction of the memory board, I had a brainwave which invalidated the whole front panel design and sent a ton of prematurely-ordered components into the spare parts bin. Instead of mounting the LEDs on the front panel with clips and rings, why not mount them along the edges of the circuit boards? Then I could make the front panel out of a piece of red transparent plastic and mask off the unwanted areas with black paint on the back of the sheet. The LEDs would shine through from the stack of boards behind. This was such a great idea in so many ways I’m surprised I didn’t think of it earlier. There would be no need for any wires flying from the boards to the LEDs, no need to drill loads of holes, and no need to mount loads of LEDs with clips and rings. The best part of this was the ease with which I would be able to make sure all the LEDs were exactly the same distance apart and in precisely horizontal rows. I was already using circuit board indicators for showing that boards have power and I knew they would be really easy to line up straight.

There was just one problem: I could only fit 32 such indicators across a board. That would allow 128 LEDs for the whole CPU which is exactly how many I was originally thinking of using, but the trouble was that some of them would be on the wrong boards. To display the address and data buses on the memory board I would need 40 right there. 32 just wasn’t going to be enough on any particular board. The solution I found was bi-level LEDs (or ‘double-deckers’ as I like to call them). When you run out of room in a city, you build upwards. With these you can do the same on a circuit board. As soon as I had figured this out I had to figure out how to drive that many LEDs without needing a private power station. Standard LEDs run bright at about 10mA so, say, 200 of them, would consume two amps. What’s more, they need resistors and drivers. It was getting a bit complicated. Then I found these (and evidently ordered a bucket-load of them):

They are super-bright bi-level LEDs. That means that at the ‘normal’ current of 10mA, they would be too bright to look at. As it turns out, each LED can run brightly from as little as 1mA which reduces the total power consumption by an order of magnitude to about 200mA. The best part of this is that special drivers are not needed; I can just use 74HC240 or 74HC244 bus drivers.

If I stick to my current layout idea, I should end up with front panel lights that look a bit like this:

Which, surprisingly, looks a little tiny bit like this: 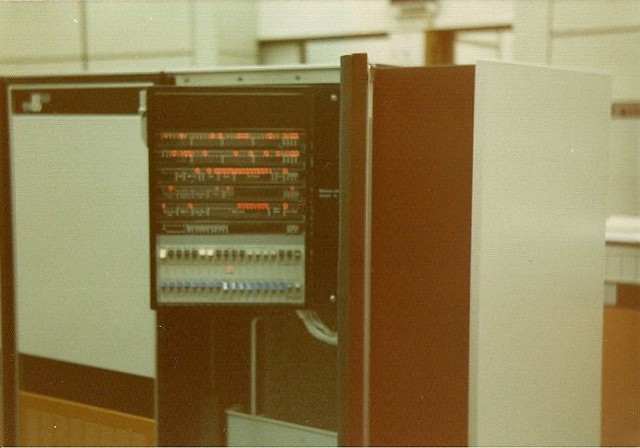 One thought on “Emitting Light”