Another six months has passed and I’m still not that much further along with the LEO-1. In the summer I started building the control board and tested a small section of it with good results. The oscillator, counter and first decoder plus some logic gates successfully generated some of the more important control signals. It’s a sad fact that it took a huge amount of time to get that section of the control board hooked up, and that only accounts for about a quarter of the whole board. Building the LEO-1 was starting to get seriously tedious. 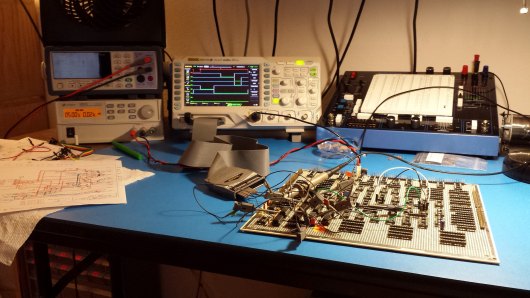 Control board generating its first signals

At this point I chanced upon a distraction. I saw on eBay a 32 x 16 flip-dot display which was amazingly cheap, and always having wanted to play with one, I decided to buy it. This kept me busy from August until October while I built a really cool clock out of it. I had to reverse engineer it, figure out how it worked, and then design my own micro-controller and driver boards to make it work. And I had to write the software. It’s not finished yet, but it tells the time. It automatically sets itself from a GPS module too so it doesn’t even need any buttons.

So, once again, LEO-1 took the back stage while I did something less tedious. But something happened while I was building the clock that changed my mind about the way I was building the LEO-1. For the first time, I actually had professional quality printed-circuit boards made. I used Express PCB which has reasonable pricing for small boards as long as you don’t bother with the silk screen and solder mask. When they arrived I was so impressed with the quality and speed of assembly that I started thinking about using them for LEO-1 as well. 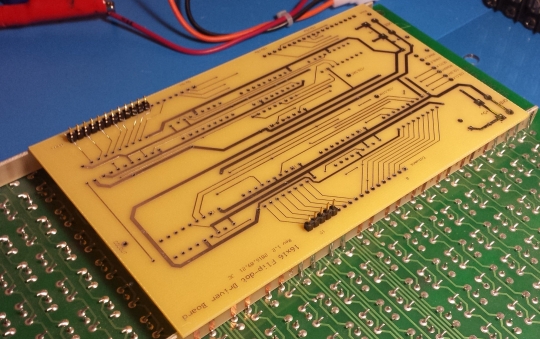 Now, earlier in this blog I had sadly stated that it would be too expensive to build the LEO-1 with PCBs, because the boards would have to be very large. If I hadn’t thought so I would have gone for it straight away and never looked back. But somehow I had convinced myself that I couldn’t justify spending large amounts of money on just the PCBs. What I didn’t realize was that instead, I was going to spend large amounts of time soldering individual wires, far more than the amount of time I would have to work to pay for PCBs. Besides, if I don’t accelerate the process I’ll never finish the blasted thing. So I did an experiment — I decided to build one of the LEO-1 boards in the PCB designer and see how it came out.

I chose the register board as it’s very repetitive. I then proceeded to spend two weeks working on it until I had painted myself into a corner and couldn’t place the last few traces. I had been so fixated on the register chips that I had forgotten to leave room for the traces to the LED drivers. This is what it looked like when I decided I was screwed:

I started again from scratch and spent another three weeks doing it right. When I wasn’t working on it, I was dreaming about it. I literally had dreams that involved trying to find efficient red and green routes from one place to another. I finally finished it yesterday. I had checked it and double-checked it constantly during the design process, but I was still unsure that it was correct. I checked it again. I printed it and checked it on paper, making sure everything would physically fit. I printed it to PDF and checked it at 800% zoom. This morning I finally decided to send it for manufacturing. As expected it’s quite big at 10.4″ by 13.3″. This is how it looks:

I’ve decided to keep the (almost finished) memory board as it is. I’m now working on the PCB design for the ALU and my experience with the register board has made it a lot easier to get it right. I’m already about half way through it. For a long time I couldn’t decide if I should keep working on the control board as it is, or ditch it and make a PCB for that too. I’m pretty sure that if the register board works out, I’ll do that. It’s annoying that I will have to desolder a bunch of stuff but at least I had the foresight to not solder all the pins of all the sockets and headers, just enough to keep them from falling out. It’s almost as if I knew…

Of course, I now have this nagging voice in my head telling me that I’m cheating. There I was, all set to build a CPU with my bare hands, but now I’m taking the easy way out. I just want to get it working so I can program it. Did the mainframe designers of the 1970s think they were cheating when they starting making their CPUs with PCBs instead of wire-wrapping? Hell no, they had simply found a way to save time. That’s how I’m justifying it to myself. I’m just saving time 😎

6 thoughts on “Taking the easy way out”